Hurling (IomanÃ­ocht) the ancient game of the Gael predates the advent of Christianity in Ireland and many accounts of epic clashes between parishes and baronies in many parts of the country are recorded in various historical journals. An account of one such game played in Blarney in 1770 is chronicled in a manuscript written in 1831 by the then Parish Priest, Fr.Matt Horgan, a man of great nationalistic fervour who did trojan work in the area and is particularly remembered for the building of the round towers at Waterloo and Whitechurch, which stand to this day. He states that he received details of the encounter from people in the parish, some of whose fathers had played in or been eye-witnesses to the event.

The game in question was played on a plain about three quarters of a mile in length by the Abhamartin northwest of Garrycloyne chapel, now known as Waterloo and about two miles from Blarney village. The captains were two local men, Rowland Davies a landlords son from Dawstown and Denis Horgan a farmer from Ballynaraha. Fifty players were allowed on each team. Davies side was comprised of players from west of Blarney Village while Horgans selection came from the eastern area. While some local players were involved it is recorded that many came from as far away as Kerry, Beara, Drimoleague, Millstreet, Youghal, Midleton and Carrigtwohill. The author paints a vivid picture of the scene; the arena was surrounded by a multitude of tents (corporate hospitality?) many bands attended, a carnival atmosphere prevailed and the proceedings were witnessed by many hundred spectators. He graphically describes a gladiatorial like contest won by Davies team on a one goal to nil scoreline, the winner being scored by the hero of the day young Cronin from the Boggeragh Mountains.

From this account it is evident that Blarney has a great and deep rooted hurling tradition, which stretches back over the centuries and endures to the present day.

It is not known when exactly the Blarney GAA club was formed as no records are available for the earlier years but it is generally accepted that Blarney is one of the oldest clubs in the country and that an organised club existed long before the foundation of the GAA. Blarney was one of the first clubs to join the infant association and an official certificate is in existence which shows the date of affiliation as 1st May 1884, some six months prior to the foundation date.

In the early days the club played in the grounds of the Castle Estate. They later moved to The Square before relocating to “no man’s land” in the mid twenties. This ground was situated in the area now occupied by the residential estates of The Groves and Castle Close. It was apparently a magnificent venue which the club attempted to acquire and develop but a dispute arose over a title which severely complicated matters and forced the club to reconsider it’s position and to eventually vacate the grounds in 1933. then moved to “The Level” a field on an elevated site overlooking Blarney Village and remained there until the fifties. In 1957 negotiations were entered into with a local landowner concerning the purchase of the present grounds. Agreement was eventually reached and on December lOth, 1957 an initial deposit of £25 was paid to Mr.Murphy thus securing the club it’s own home and a permanent base for the first time in it’s history.

At the third meeting of the GAA held in Hayes Hotel Thurles on January 17th, 1885. The rules for hurling, football and athletics were formulated and adopted and it is held locally that the first game of hurling under the new rules was played in Blarney Square.

On May 3rd. 1885 the first open athletics meeting in the country under GAA rules was held in the grounds of Blarney Estate and was a resounding success.

At the first GAA congress held in Hayes Hotel Thurles on October 31st, the Blarney club was represented by Eugene Cotter and Con Buckley.

A meeting of all affiliated clubs was held in Cork on December 19th, 1885 for the purpose of forming a committee to administer the affairs of the Association in the county and at which the Blarney club delegate Eugene Cotter was elected a member of the first Cork County Board.

The first county championships were played in 1887 and Blarney, known as the wearing of the green club, took part in both codes playing Little Island in hurling and receiving a bye in football. While the record’s do not show the footballers taking part in any subsequent championships the hurlers played on and off until 1908 and reached the club’s only County Senior Hurling Final in 1894 where they lost to Blackrock on a 1-5 to 0-2 scoreline. The Blarney team lined out as follows: J.Lynch, D.O Mahony, J.Horgan, J.O’Brien, J.Morrissey, J.Twomey, D.Sheehan, T.Aherne, T.Hayes, D.O’Leary, T.Mescall, W.O’Riordan, D.J.Buckley, T.O’Connor, T.Healy, D.Higgins, M.Madden.

The County Board introduced a Seconds Championship in 1895 (the forerunner of today’s junior?) and Blarney played in this competition for a few years reaching the final in 1898 where they were defeated by Redmonds.

The Intermediate Hurling Championship was introduced in 1909 and Blarney played in this grade in many of the years until 1930 when they regraded to junior.

In the mid twenties the old club colours of green and white were changed to the present day colours of red and white. No official reason exists as to why this change of colours took place but at that time green, the colour closely associated with nationalism featured in the colours of the majority of clubs and it may be safely assumed that the introduction of a variety of different colours was brought about to avoid confusion and to give a more positive and individual identity to clubs.

A fact not widely known is that a County Senior Hurling Final was played in Blarney on July 14th 1890 in the grounds of Blarney Estate Aghabullogue defeated Aghada by 7-3 to 1-1 to win the title. Aghabullogue by winning the county earned the right to represent Cork in the All-lreland series and in November of that year, at Clonturk Park Dublin, defeated Castlebridge of Wexford to win Cork’s first All-Ireland Senior Hurling Championship. A Blarney player, Ned O’Reilly of Shamrock Terrace “guested” with Aghabullogue and holds the distinction of being the first player to bring an All-Ireland Medal to Blarney. The first championship won by the club was the Mid-Cork Minor Hurling Championship of 1927. Further titles in this grade followed in 1932, 1945, 1946, 1955, 1983 and 1997. The 1927 and 1945 sides reached the county final where they were defeated by Nemo Rangers and Glen Rovers respectively. The 1997 side took part in the County “A” Championship and duly won same defeating Fermoy in the County Final.

In 1931 Blarney won it’s first Mid-Cork Junior Hurling Championship. To date this title has been won on thirteen occasions and the club presently lies third in the roll of honour behind Aghabullogue and Cloghduv. 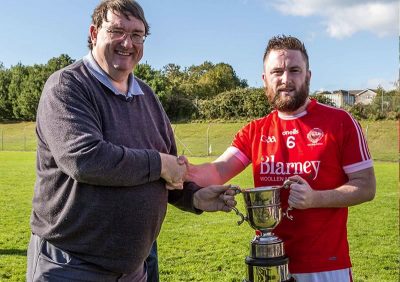 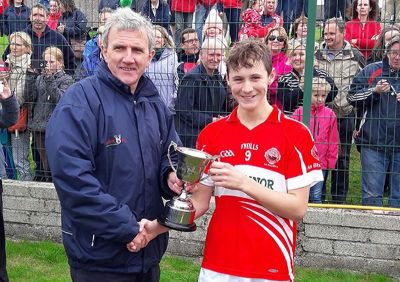 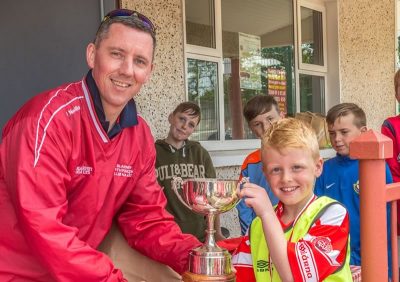 The Cork Junior Hurling Championship has been won on two occasions. In 1936 Ballymartle were defeated in the final at the UCC Grounds while in 1993 Kilworth were overcome in the final at Pairc Ui Chaoimh.

While Blarney is predominately a hurling club the Mid-Cork Junior Football Championship has been won on four occasions; 1951, 1954, 2009 and 2010. Winning this title two-years running was a major highlight in the clubs history.

Denis Lynch was a member of the Cork team, which won the first All-Ireland Minor Hurling Championship in 1928. Other Blarney players to win All Ireland and Minor medals were John P.Creedon 1937, Tom Aherne 1941 and David O’Brien in 1970.

John, Mitchell was goalkeeper on the 1966 Cork team, which won the county’s first All-Ireland U21 Hurling Championship when they defeated Wexford in the final in the second replay. John was also the UCC goalkeeper when they won the 1967 Fitzgibbon Cup.

Liam Murphy was goalkeeper on the Thomand College Limerick team, which won the All-Ireland Club Football Championship defeating St.Johns Antrim in the final in March 1978. Three months later he was a sub on the Blarney junior football team, which lost to Kilmichael in the first round of the Mid-Cork junior championship at Macroom.

Our club has a strong history of representation at Intermediate hurling at Intercounty level. James Hughes played for Cork Intermediates for a number of years, winning All Ireland medals in 2001, 2003 and 2006 with Darragh McSweeney being part of the 2004 and 2006 victorious teams. Joe Jordan became the second Blarney man to play at centre back for the minor hurlers and picked up a Munster medal in 2006.

While in 2011 and 2012 Barra O’Connell played for the Cork minor hurlers and later became a pivotal player when he was U21 for Cork.

Both Mark Coleman and Conor McCarthy lined out for the Cork minor hurlers in 2015.

In 2016 aged 19 years old, Mark made his senior intercounty hurling championship debut as a substitute for Cork against Wexford in Thurles. The following year Mark started left half back for all of Cork’s championship campaign.

Mark ended the season with an All-Star award at wing back. The very first All Star award for our club. On 1 July 2018, Coleman won a second successive Munster medal following a 2-24 to 3-19 defeat of Clare in the final. Mark also won a Munster U21 medal playing centre back. He ended the season by being nominated for a second consecutive All-Star Award as well as Young Hurler of the Year.

In 2017 Shane Barrett and Declan Hanlon were part of the Cork u17 hurling panel who won the Munster title and All Ireland final. Declan lined out at centre forward. Cork won the championship following a 1-19 to 1-17 defeat of Dublin in the All-Ireland final. The same year Declan was on the U18 pane along with Conor Power.

Another first for our club, we had four players involved with the Cork U20 panel in 2019. Conor Power, Padraig Power, Declan Hanlon and Shane Barrett.

In 2020, after winning the Premier Intermediate County championship to regain senior status, the brilliant performances we saw from Shane Barrett earned him a call up to the Cork Senior Squad. Shane made his debut for the Cork Senior team in a Championship game against Dublin becoming just the second clubman to play Senior hurling Championship for Cork.