Blarney Healthy Club was setup in January 2020, but it was in the making for nearly 12 month prior to that.  The Healthy Club was initially launched by Jim McEvoy, Valerie Kirby, Martina McCarthy & Lisa Hedderman. The club was setup because they saw what other GAA Healthy Clubs were doing in their communities & the benefits that it brought to everyone in the community.
They knew that we have a fantastic community here in Blarney & that the community would welcome & support the idea.

OUR MISSION – “To get the GAA off the pitch, out the gate and into the heart of the community”

WHAT WE HAVE BEEN UP TO:
In January 2020, the first initative was launched “Walk on Wednesday” – where members of the community, all ages & abilities met at the GAA on Wednesday night to walk, run, crawl laps of our beautiful village. These were fantastic events as it got everyone out of the house, getting some exercise & having the “chats” with whoever you met along the way. Unfortunately, Covid hit & we were
unable to continue, but it didn’t stop there. 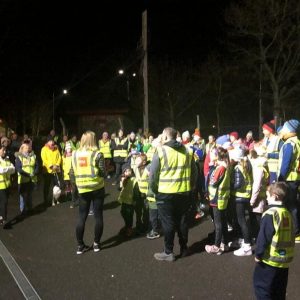 Covid changed our direction, to where the club became involved with the Community Response Forum and volunteers were rounded up to help anyone in the community who needed it. We had gutters cleaned, prescriptions collected, shopping for people that were cocooning and delivered Meals on Wheels. If anything needed to be done, someone always stepped up.

When we couldn’t “Walk on Wednesday”, the Healthy Club arranged “Talk on Wednesday”, where over a 3 week period, a zoom meeting was setup with talks from Dietcian Billy Murphy, Health & Fitness Coach Eoin Cadogan and Dr Sharon Lambert on Mental Health & Wellbeing. 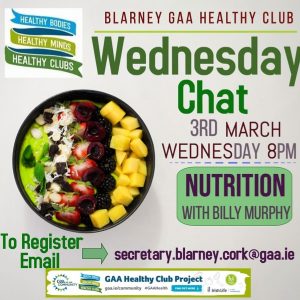 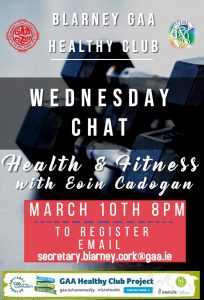 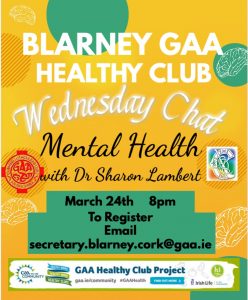 The big success of 2020 was the “Blarney 500”, where the club aimed to walk, run, cycle, crawl 500 miles in 24 hours, and raise much needed funds for charities. This event brought such a lift to the community, where everyone got involved and not just locally. We had people of all ages taking part & from Station Road to Sydney, Perth, Boston, London, New York just to name a few !
Over 17,000 was raised for Pieta House, Marymount Hospice, Blarney First Responders & Blarney Meals on Wheels.

Over the Christmas period, children from the local primary schools, wrote letters to older people in the community. This was one of the most heartfelt project, as it bridged the gap between the generations, connecting the younger & older members together & forming new friendships. 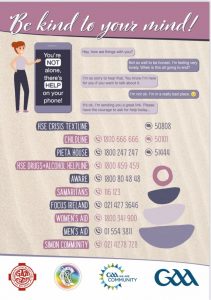 In March 2021, the Healthy club along with Dr Sharon Lambert launched the “Be Kind to your Mind” campaign. This mental health campaign was to show that there is always someone there and always someone to listen and to help.  The campaign launched posters, cards & leaflets with local numbers of Helplines, such as Pieta House, Childline, Simon and many more.  The posters & cards were distributed to local shops, health centres and schools.

In May 2021, the “Blarney 500” was kicked off again, with guest appearance from the likes of Niall Quinn, Rob Heffernan, the clubs own Conor Mc Carthy & of the course the King of Party – Marty Morrisey. Like our previous event, this was another fantastic day, with pilates classes thanks to Jennifer Earle Pilates, spinning classes with the amazing Christina & Denise of DC Fitness, not to mention, marathons, half marathons, walks, bike rides & we even had 6 month old Fiadh crawling in London !
The charities for 2021 were Jigsaw, Cork University Hospital, My Canine Companion & Sensory Equipment for local schools. The event was another outstanding success, raising vital & much needed funds for each of the charities. 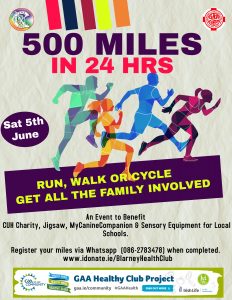