Blarney GAA history was made when Shane Barrett came onto the field of play late on in today’s All Ireland Hurling Championship Qualifier against Dublin. He becomes only the second player to play Championship hurling for the Cork Seniors.

Mark Coleman started the game at #7 but quickly took up the role of sweeper. Mopping up ball after ball, Dublin found it extremely hard to avoid Mark as he set up score after score. For the second week in a row, Mark had the most possessions on the Cork team.

Cork now go into the Round 2 Qualifier hat with Clare, Tipperary & Wexford for the draw on Monday morning. 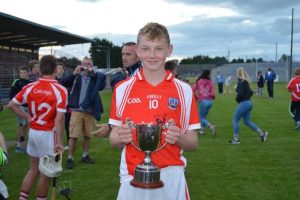